Twenty-seven Palestinians were killed by Palestinians: 25 in the Gaza Strip, 20 of them, including seven minors, by rockets fired at Israel that landed within Gaza during Operation Guardian of the Walls, and two in the West Bank by Palestinian Authority security forces during their arrest.

Regarding eight Palestinians who were killed during Operation Guardian of the Walls, six of them minors, B’Tselem was unable to determine whether they were killed by Israeli attacks or by Palestinian rocket fire.


In the West Bank (including East Jerusalem), 83 Palestinians were killed, including 17 minors and five women, 77 by Israeli security forces

Thirty-two of the fatalities killed by the Israeli security forces, including nine minors, were killed at or near demonstrations or in incidents in which Palestinians hurled stones at Israeli security forces or civilians. Among them were Islam Dar Nasser , 16, and Muhammad Tamimi , 17, whom soldiers shot from behind.

14 May 2021 was the deadliest day in the West Bank since 2002: 13 Palestinians were killed (two died of their wounds in the following days). Among them were Nidal Safdi Awad Harb and Isma’il Tubasi – all three killed by armed settlers or by soldiers escorting them during incursions into their villages’ land. These incidents are several examples of the spike in settler violence in the past year. In 2021, B’Tselem investigated 336 incidents of settler violence, as opposed to 251 in 2020. These incidents make it abundantly clear that settler violence is not a private initiative but another, less formal tool that Israel’s apartheid regime uses to take over more and more Palestinian land.

Eight of the fatalities in 2021 were killed at or near protests against the establishment of the Eviatar outpost on land belonging to the villages of Beita, Qablan and Yatma - demonstrating the means Israel's apartheid regime takes over Palestinian land for the purpose of establishing Jewish settlements. Seven of the persons killed were residents of Beita, including two minors. Since the outpost was established, the Israeli military has prevented Palestinian farmers from accessing hundreds of dunams of their land adjacent to the outpost, blocked agricultural roads and damaged them repeatedly. Another resident of Beita was fatally shot by a soldier near the village’s water valves.

Thirty-six Palestinians, including four minors and five women, were killed in incidents in which they attacked, attempted to attack or allegedly attacked Israeli security forces or civilians with a car, a knife or a firearm. Clearly, even such cases do not automatically justify lethal fire. Two blatant examples of unlawful and unjustified shooting under such circumstances are the killing ofOsama Mansur , who was not endangering the soldiers’ lives and was mistakenly suspected of trying to run them over, and of Fahmeyeh al-Hrub , 60, who was slowly advancing towards the soldiers who killed her.

During the May fighting in the Gaza Strip, Israel killed 232 Palestinians including 54 minors and 38 women. At least 137 of them did not participate in hostilities, including 53 of the minors and all women. Three other Palestinians, including Omar Abu a-Nil , 13, were killed during protests along the perimeter fence, and a fourth was killed while hunting birds several dozen meters from the fence.

Israel’s lethal, wanton, unlawful open-fire policy resulted in the killing of hundreds of Palestinians this past year. About 70% were killed in the Gaza Strip when the criminal policy of bombarding densely populated areas was implemented. Israel reverts to this policy in every round of fighting, despite the horrendous, predictable outcome.

Senior Israeli officials – government ministers, military commanders and legal advisors – justify the open-fire policy. They insist that lethal fire is used as a last resort, in accordance with Israeli and international law, and stress that the incidents are investigated. Yet the facts show otherwise: lethal shootings are a routine affair, and no one is held accountable. 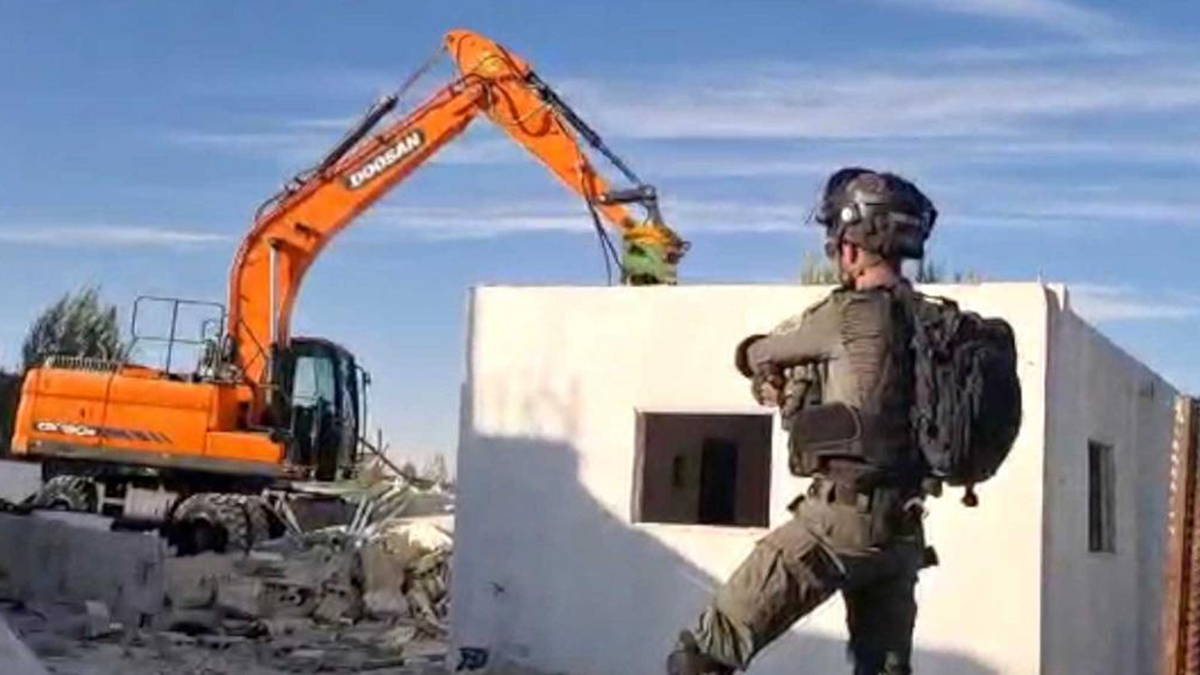 HOUSE DEMOLITION IN THE VILLAGE OF AL-WALAJAH, STILL FROM VIDEO, 9 NOV. 2021
Demolition of homes and other structures

In the West Bank and in East Jerusalem, 895 Palestinians, 463 of them minors, were left homeless this year after 295 residential structures were demolished – the highest number since 2016.

Throughout the year, another 548 non-residential structures were demolished on Israeli authorities’ orders, including cisterns, warehouses, agricultural structures, businesses and public structures – the highest number since 2012.

In East Jerusalem alone, 160 structures were demolished, 96 of which were homes. In the West Bank, recent years have seen a steady increase in home demolitions: in 2021, Israeli forces demolished 199 structures, as opposed to 151 residential structures in 2020 and 104 in 2019.

These demolitions are not a matter of “law enforcement”, as Israel claims, and Palestinians who build without permits are not “criminals.” The Israeli apartheid regime blocks almost all Palestinian development in vast parts of the West Bank, including East Jerusalem – while building massively for Jews. This policy leaves Palestinians no choice but to build without permits, so as to have a roof over their heads. At that point, the Israeli authorities issue the structures demolition orders. Whether the orders are fulfilled or not – they leave the residents in a permanent state of uncertainty regarding their future.